Approximately 1% of wild orcas exhibit fin collapse, where the dorsal fin leans to one side. A rare occurrence in the wild, fin collapse is exhibited more in whales with poor health, and may result from serious injury, such as an oil spill or a collision. The resulting scar tissue can result in the fin’s deterioration, thereby causing it to collapse. Despite the fact that dorsal fins stand straight up in the air, they consist of collagen, which is a fibrous connective tissue, which is more vulnerable to injury than a more rigid type of tissue. The National Marine Fisheries Service has reported that “the collapsed dorsal fins commonly seen in captive killer whales do not result from a pathogenic condition, but are instead thought to most likely originate from an irreversible structural change in the fin’s collagen over time.” 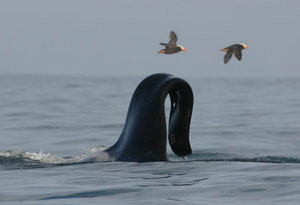 In the ocean, orcas spend most of their lives swimming straight and quickly through the water, allowing water flow on both sides of the dorsal fin. This equal water pressure allows the tissues to remain healthy and straight. Obviously, orcas need to turn in order to maneuver themselves through the water. However, their movements are random, so the water pressure doesn’t begin to weigh more heavily on one side.

Contrastingly, 30-100% captive orcas, most of them being males, have dorsal fin collapse (male orca dorsal fins are bigger). Due to the inadequate amount of space that captive orcas are given, they spend most of their time resting at the surface, and only have the choice of swimming either clockwise or counterclockwise around the pool. Turning constantly in such a pattern puts most of the weight from water flow on one side of the fin, and spending so much time resting at the surface allows gravity to pull down on the fin. his excessive surface resting also results in more sun exposure, which softens the collagen. Further, many marine parks house their orcas in pools that slightly exceed marine temperatures. This, and decreased movement and exercise lead to reduced food intake. The result is less hydration than their wild counterparts because orcas extract fluids from their food (as a source of fresh water). In addition, frozen-thawed fish are a lesser source of fluids than are live prey. The combination of these factors puts the dorsal fin in a position where the tissue begins to atrophy, and thus causes the fin to flop over to one side.

Keiko, being loaded into a transport tank at Oregon State Aquarium

While Sea World asserts that dorsal fin collapse “isn’t an indicator of the animal’s health or well-being,” it doesn’t occur in nearly the same frequency in the wild as it does in captivity. This certainly isn’t normal. After the 1989 Exon Valdez oil spill, two male orcas that had been exposed to the oil exhibited fin collapse, and subsequently died. In 2002, a stranded male orca in Washingtondeveloped fin collapse after three days. However, being released and resuming a normal swimming pattern, the animal’s fin regained its erect position. So what does all this say about whether these animals should be held in captivity? 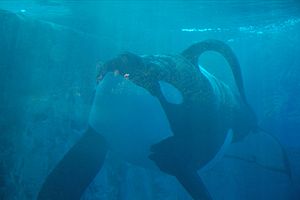 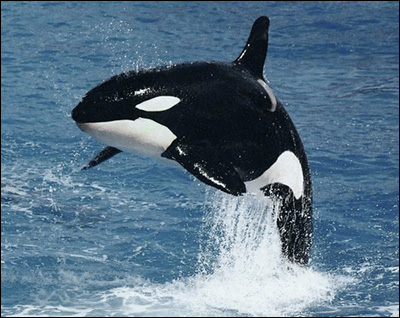 ← Dolphin Meat in Taiji… A Killer from the Killers
Overfishing and Pollution: Diminishing Life in Earths Lifeline →

One thought on “Fin Collapse in Killer Whales”